It could be said that the 2019 OK Nationals hosted by SCYC at Abersoch started with a bang, built to a crescendo of close racing and energetic socialising and ended with a whimper but one thing is certain – it is an event that will be remembered for all the right reasons. A fantastic venue, great race management from the host club, fantastic support from our valued sponsors, good weather, close racing on the water and a real spirit of camaraderie off the water.  The week kicked off at registration each sailor was given a goodie bag including a free towrope and dyneema kicker strop courtesy of sponsors English Braids who also provided many other valuable prizes throughout the week. 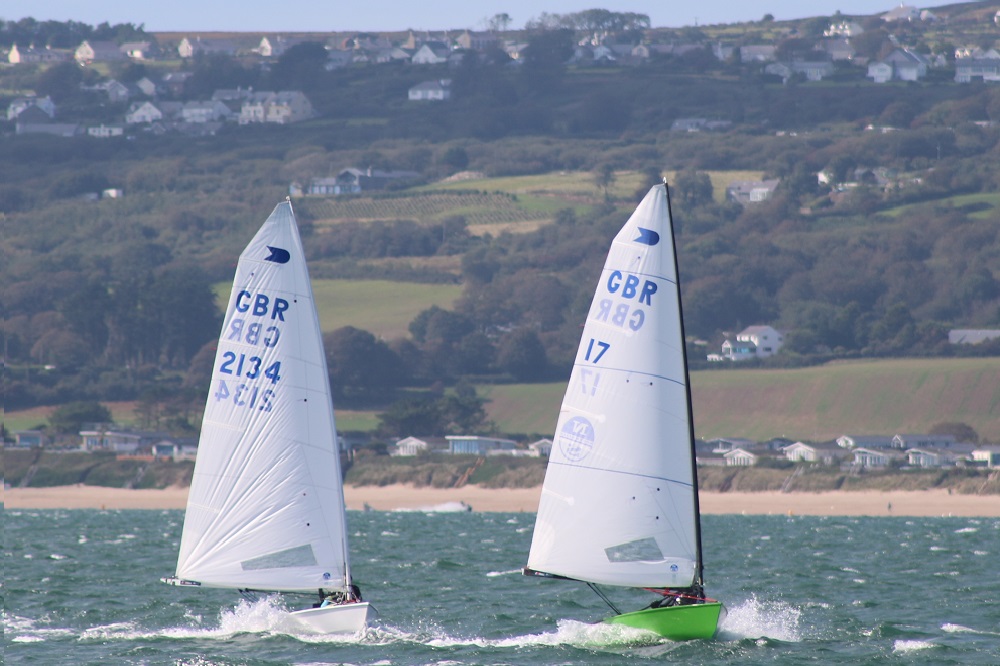 As always in a competitive fleet like the OKs, it took a few attempts to get the fleet away for the first race with the PRO resorting to using the black flag for the third start, which saw Ben Falat port tacking the fleet after bravely pushing the line. Unfortunately for Ben, he pushed it too far and he was black flagged for it. More unfortunately for Ben, this was the least of his worries as a capsize at the first gybe mark saw his mast come loose from the boat and by all accounts it took a lot of swimming under the boat to recover the situation and get home safely with the boat thankfully undamaged. Half way around the course a big windshift required the windward mark to be moved and while the fleet did hear and see the ‘C’ flag notification there was some confusion about what mark to go to as the original windward mark was still in place. This confusion did see some gain and some loose, but by the end it was Fergus Barnham who took the win from Terry Curtis with Nick Craig following in third

Race two was sailed in similar conditions with Nick taking the win from Richard Burton and Terry Curtis again showing the speed of his old boat and taking third.

The evening saw spot prizes being given out courtesy of Sponsors Noble Marine for both the top of the fleet and those at the back who worked just as hard but for longer. The award of the yellow suit to the ‘Dick of the Day’ to Andy Rushworth for being one of many who got their car stuck on the soft sand of Abersoch beach 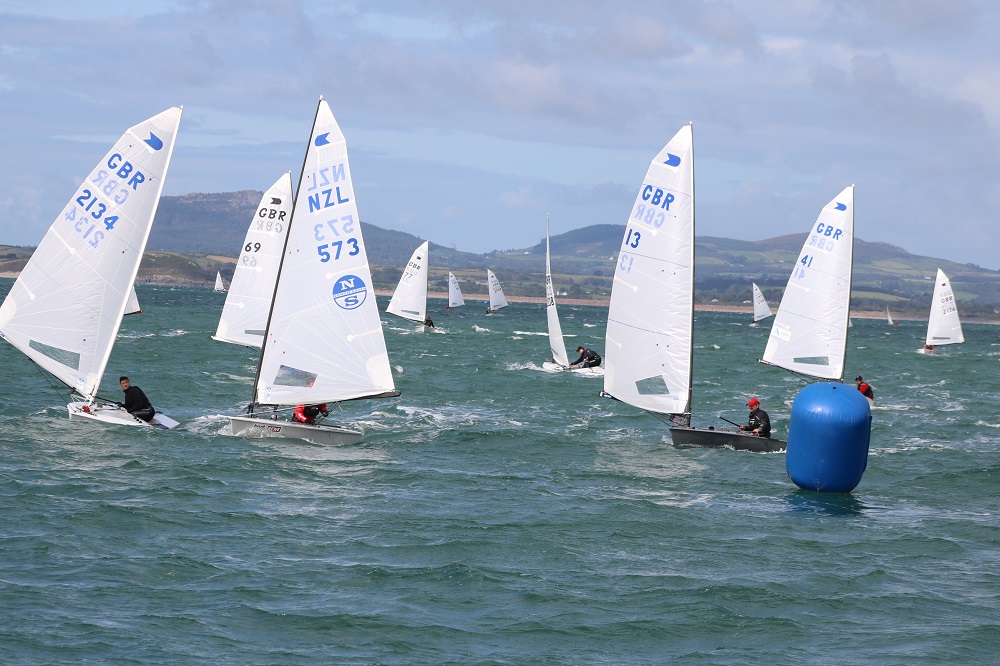 Day two started extremely blustery with the forecast being for the wind to drop from stupidly windy down to just seriously windy. As it turned out that was generally what happened but there were still a few viscous gusts making things interesting all day. UK resident Kiwi, Luke Gower who had missed the first day due to family commitments, made up for that with storming ahead to take the win after a hard fight with Nick Craig. Gavin Poullion in his new boat sailed, an absolute stormer of a race to take third in conditions he clearly loved. With the fleet slightly reduced by the strong breeze, race four of the series was sailed in similar conditions to the first. This time Gavin decided that a swim at the gybe mark was required to check his new hull condition even if he was near the front at the time. As the fleet tired, it was a day for the hard hikers to show their capacity to keep going with Nick taking the win from Luke and renowned heavy (air) sailor Richard Burton in third. This left Nick leading the fleet at the half way stage from Richard Burton in second and Fergus Barnham in third.

Friday evening saw a slightly riotous class dinner with Ed Bradburn being unanimously awarded the yellow suit for being near the front of the fleet in the third race but tacking round at the first gybe mark. A prize draw was held for those who had entered early along with more spot prizes for the front and back of the fleet courtesy of Noble Marine, Ovington Boats and North Sails. The night was rounded out by Class Measurer Tim O’Leary giving a rousing rendition of his fabled ‘Wild West Show’ monologue. 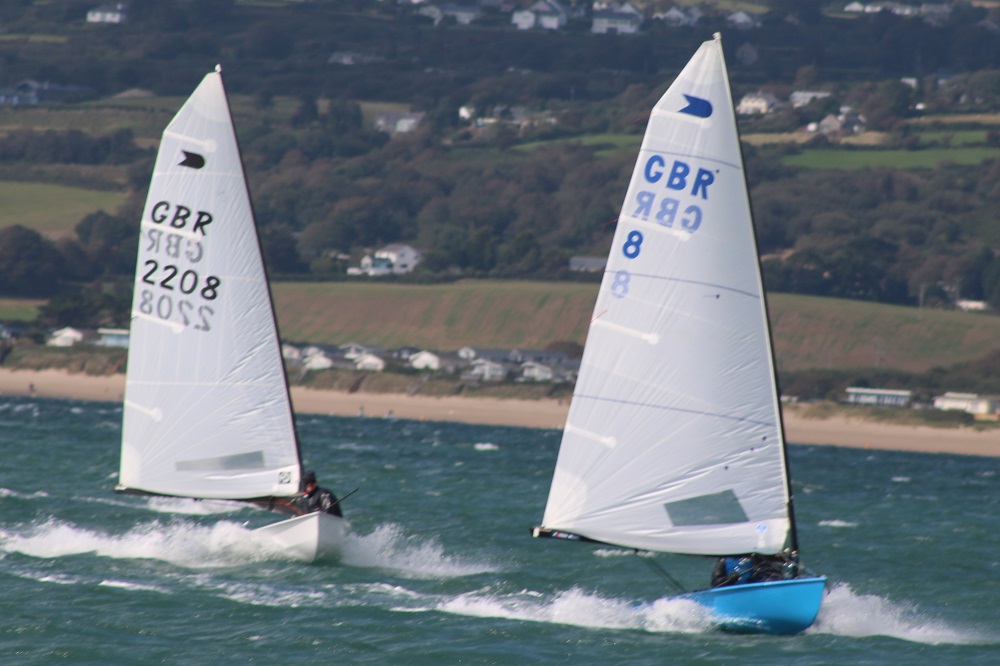 A sunny and warm morning greeted the fleet for the third day of the Championship which lured a few into dressing for warm weather out in the bay. The reality was a bit different and a solid offshore F4 with a few stronger gusts and a nasty short chop worked to cool the fleet off once out on the race course. The now well established norm of a general recall to give the fleet a bit of starting practice followed by the immediate raising of the black flag saw the fleet get away relatively cleanly at the second attempt. However not all the fleet had an incident free start with one sailor capsizing at the committee boat end, first bashing nearby Fergus Barham on the head with his mast, then getting stuck on the committee boat anchor chain., The PRO is reputed to have said to the unfortunate sailor who was busy climbing up the anchor chain in an attempt to get his boat clear, ‘if you wanted an invite to come on board the committee boat all you had to do was ask!’

As the fleet planed at full speed around the first triangle the leaders on the second reach were greeted by the sight of the leeward mark proceeding upwind at several knots. We understand the two leading boats made their thoughts known in a few strongly worded statements! The mark was however dropped and re-anchored before the leading boats caught up with it. Richard Burton lead all the way round but was overtaken by Nick Craig on the final beat with Ed Bradburn getting his best result of the week in third and Fergus Barnham coming in fourth.

Surprisingly the second race of the day got off to a clean start without any recalls and Luke Gower and Nick Craig pulled away from the mass of the pack to fight it out. Nick got the better of Luke in the end to claim his fourth win out of six races and led an exhausted fleet on a close reach back to Abersoch. It was warming to see the front of the fleet helping the backmarkers with their trolleys as they arrived and to pull them up the sandy beach. Unfortunately, everybody had to face the steep climb up to SCYC by themselves

Once ashore and refreshments were in hand, there was little debate about who the winner of the fabled yellow suit was going to be and poor Ian Harris who had capsized onto the committee boat knew he was going to get it long before he even got back to the beach. As with all the other winners of the yellow suit, he wore it with grace and cheer and added his name to the long list of previous winners. 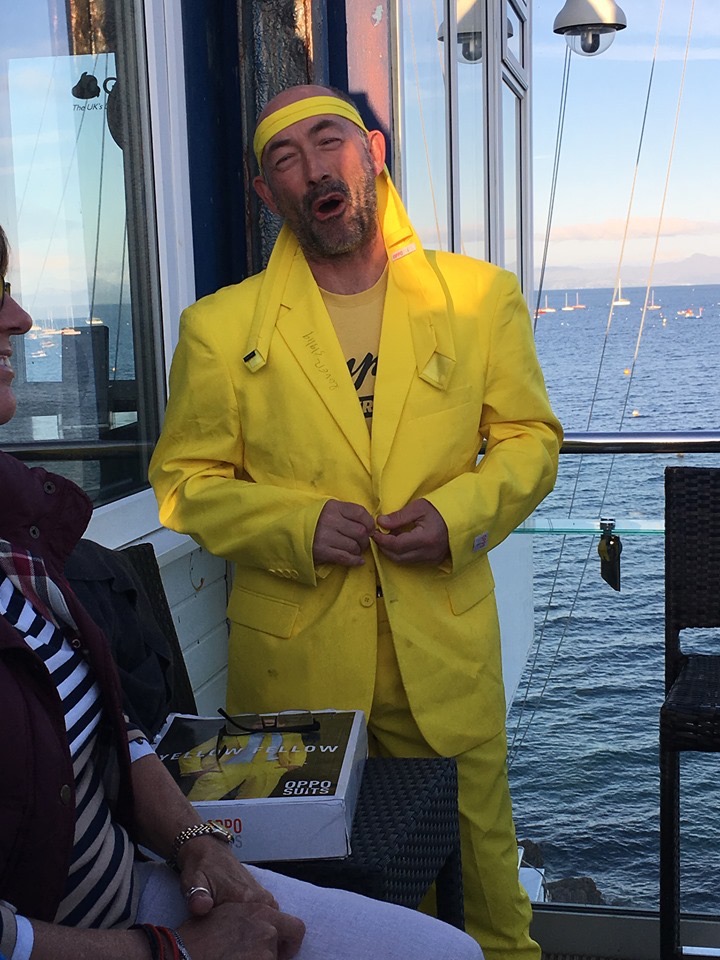 Day four didn’t happen. It was due for an early start but the fleet were greeted with no wind and while the forecast was for the wind to swing north and increase in the afternoon, the PRO decided after visiting the race area to cancel any further racing around 11:30 as the wind was unsteady on the course and while a light breeze did start to develop his opinion was it would not be a fitting Championship quality race to finish on.

And so the 2019 OK National Championship came to an end with a fizzle rather than a bang but it did allow everyone with long drives to the corners of the British Isles to get away early . It was generally agreed that the fleet was tougher and tighter than it had been for a few years and while Nick won, he didn’t have it all his own way

At the prize giving the fleet were greeted by a table bulging with trophies and prizes from our kind sponsors English Braids, Ovington Boats, North Sails, Noble Marine and Rain and Sun. Class Chairman Bill Bradburn also paid warm tribute to the SCYC shore and race teams and was delighted to see a few previous class chairmen and OK sailors had made the journey out to Abersoch just to be part of the celebrations

Special prizes were given out to those attending their first OK Nationals – Paul Craig, Chris Baines and Ben Pickering before the main prizes were awarded. We’re pretty sure they will all be back again J. The main prize winners were-

Paul Craig also picked up the Mark Williams Trophy for being the boat with the highest score that had completed all the races sailed. Fittingly, given the cohesive nature of the OK fleet, this was graciously presented to him by the championship winner, Nick Craig 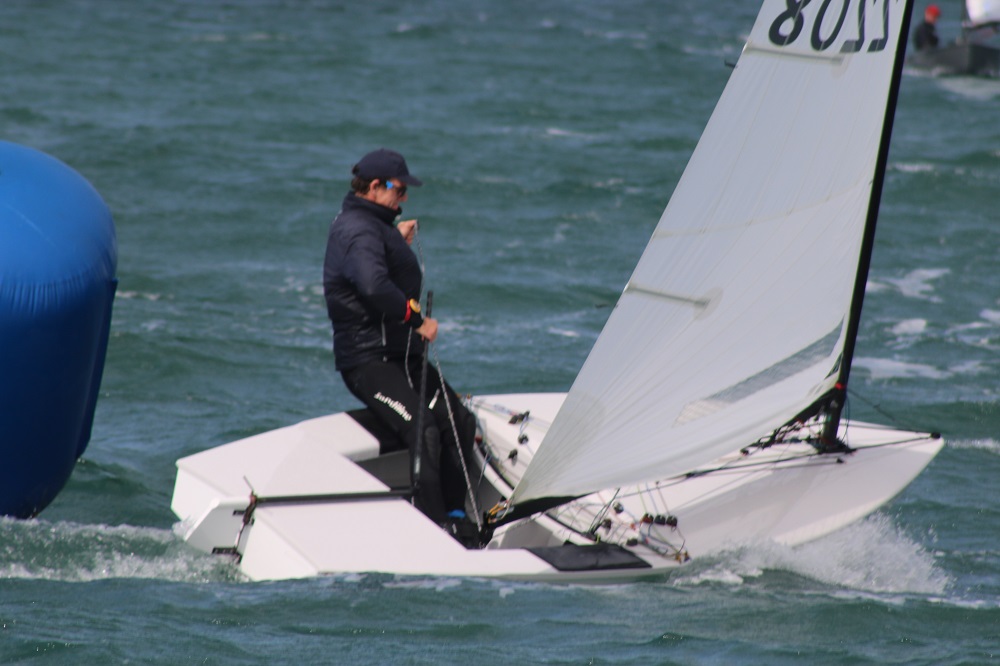 If one thing is clear from the results both here and overseas is that a new boat is not required to do well in the OK. While Nick Craig won in a new Ovington boat, there were five other different hulls in the top ten and remarkably third place was taken by a 10 year old boat with a penultimate generation carbon rig and fifth taken by a 25 year old wooden boat with a current generation carbon rig. Dave Bourne’s new home built boat (in a fetching shade of snot-green) took 9th. Sails were generally a mix of HD or North with at least one from sail from OK legend dick Batt. Preferred headache cures were paracetamol, coffee and sailing

With three current world class OK builders in the UK, strong rumours of Rushworth Racing getting back into producing OKs by building a new mould and the worldwide upsurge in home building using laser cut flat pack kits there has never been a better time to get into OKs. All the main suppliers can provide a ready to sail package and modern carbon rigs are now so consistent in build that worries about getting a bad or unsuitable mast are things of the past. Next year’s Nationals are earlier than usual at Weymouth sailing Club from June 25th-28th and promises to be another classic event as the class builds towards the World Championships at Lyme Regis in 2022. Entry for the 2020 Nationals will open at the Dinghy Show at the end of February / start of March

The 2019 OK season will close out with a one day event at South Staffs SC, 28the Sept, and the End of Seasons, which is always well attended, a month later 26th/27th October at Grafham. In 2020 the OK Europeans are in Denmark in May and the Worlds are at Marstrand in Sweden in August. With the rate the OK fleet is drawing top sailors in from other classes around the world, these promise to be events not to be missed.