In the biggest turnout in a decade an amazing 46 OKs arrived at Weymouth Sailing club for the 2022 OK Dinghy Nationals sponsored by Allen Sailing.

While the Weymouth SC OK fleet had the biggest club contingent, Hayling Island SC was close behind in numbers – a clear indicator of the growth in the OK as a significant class there. Giving the event an international flavour were three boats from New Zealand (two UK based Kiwis, plus one NZ based British pro-sailor who was stuck in the UK while waiting for a chance to return to NZ) and two boats from UK based Polish Sailors.

With a few days to go it was clear that the event was going to be windy, but quite how windy it was going to be surprised everyone. The first day (Thursday) saw a strong SSE wind pushing a large swell into the bay and after venturing out the RO decided the combination of large swell in the bay and very strong wind did not make it safe to run races. With the courses planned for Weymouth bay and WSC sailing out of the harbour the option even to head for the shelter of nearby Portland harbour was not possible. 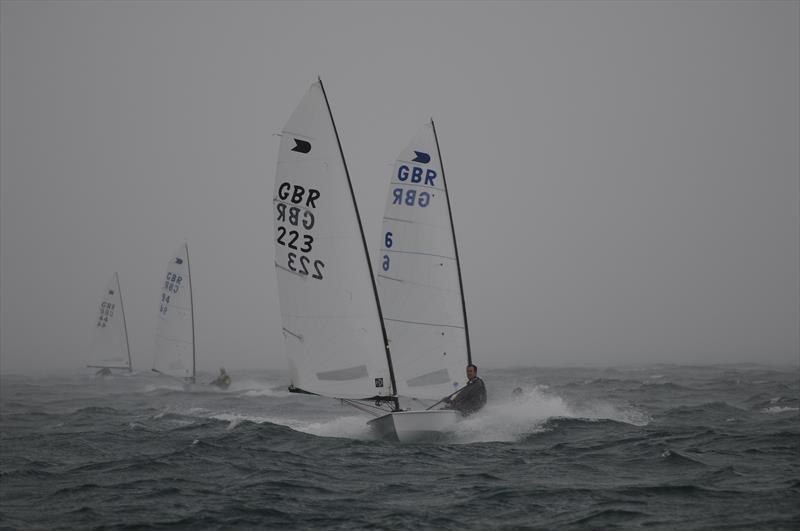 Day two (Friday) saw another wild day in the bay, this time although the wind was from the SW it was extremely strong, visibility was poor at times in the continual rain and the RO regard it as beyond the safe limits for running a race. It was perhaps a day better suited to Weymouth Speed Week than dinghy racing. However, with the ever-hopeful enthusiasm of the top sailors evident and the possibility of conditions moderating, the fleet stayed ashore and killed time hoping for a launching signal that never arrived. After an early AGM but with the event in jeopardy with a forecast of continued strong winds over the weekend the fleet agreed to make a change the sailing instructions to allow a three race series and to try for three races on the Saturday as the forecast for Sunday was looking worse.

Day three (Saturday) was make or break day for the Championship. If the weather didn’t co-operate and a practical limit on how late races could be run on the Sunday there may not have been a championship to write about. However, the conditions were workable – windy but workable so the fleet headed out in the hope of getting three races in. 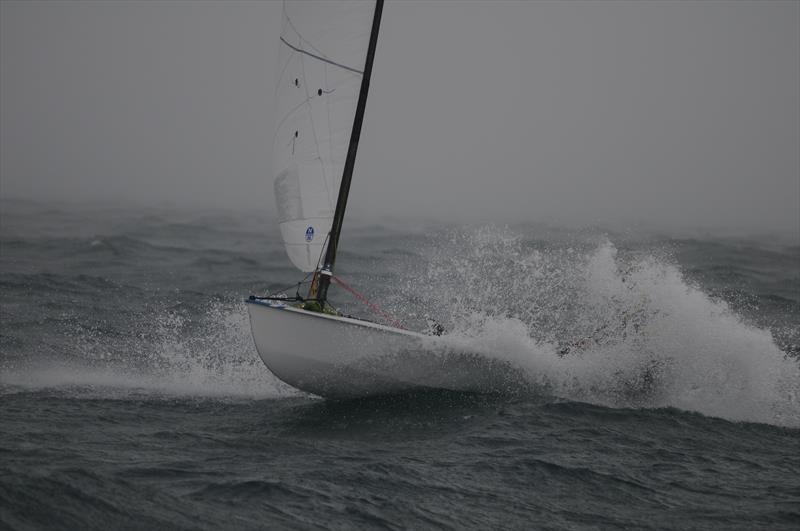 Conditions were F5+, gusting a lot more from the SW and Race Officer set a course with the windward mark close to the Portland Harbour breakwater off the Nothe Fort. In a surprising innovation for the class, the first race got away without any general recalls and it was soon apparent that it was going to be a day for the hard hikers. OK regular Richard ‘Burt’ Burton led round the first mark from ex-Finn sailor Henry Weatherell, Nick Craig closely followed by another ex-Finn squad sailor Andrew Mills. With frequent rain squalls coming through, everybody had a full-on race and at the finish the final positions were Henry from Nick Craig and Andrew Mills in third.

Race two followed a similar pattern with some significant squalls coming through turning the water white with spray and the sky grey with bad visibility. Once again, the young Finn sailors Henry Weatherell and Andrew Mills let their hiking fitness shine taking first and second from Nick Craig in third. As the race ended, a huge 35knt + squall came through over Portland Harbour and the fleet scurried as best they could back to the harbour. 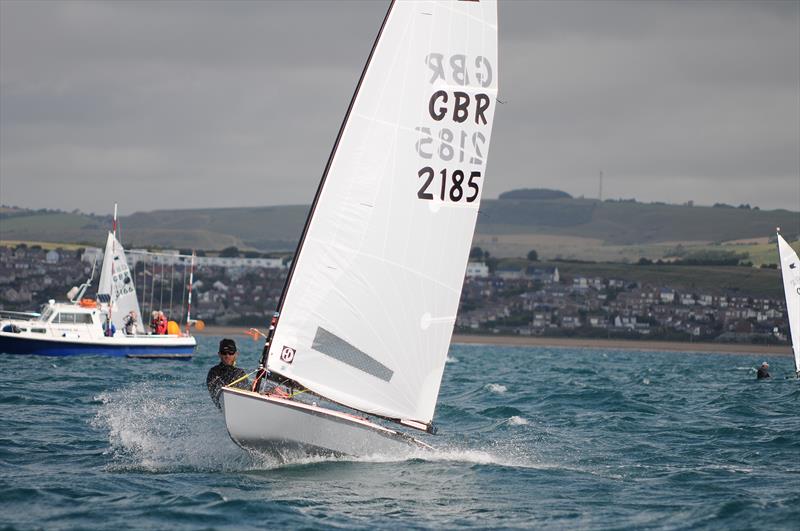 After sheltering ashore and enjoying a refreshments courtesy of sponsor Allen Sailing, the race officer decided that he would try for a third race to secure the championship. So it was a slightly reduced fleet headed back out to face what the weather threw at it. It turned out to be an even stronger wind than race 1 & 2 and more vicious low visibility squalls. Once again, the hard hiking Henry Wetherell took first with veteran Nick Craig taking second from local Terry Curtis proving you don’t have to be 6 foot plus to do well in the OK in big winds. It was another hard sail back to shore with Americas Cup sailor Jim Turner capsizing in the middle of the harbour much to the amusement of many. Adam Savage was last in after an extended period upside down but unable to right the boat without assistance as the kicker had got wrapped around his foot With three races now completed and a maximum of two races remaining if the weather cooperated it was clear that Wetherell had won, but there was still some racing to be done.

Day four (Sunday) greeted the fleet with still more strong winds and a less than enthusiastic fleet, but the committee boat headed out determined to get more races in. With reports from the committee boat of 25-28 knots average with gusts in excess of 32knots most of the fleet started packing ready for an early departure, but to the surprise of many the flag went up to advise sailors to get ready to launch. Some of those who had packed up already, reversed that and so it was a smaller fleet headed out to see what conditions were like. When they got there, they found it was definitely ‘fresh to fruity’, but they managed to get another two races in. Again, Wetherell took the bullet from Nick Craig and Terry Curtis before heading home with a convincing Championship win while the second race of the day was won by Andrew Mills from HISC followed (again) by Craig and Curtis. 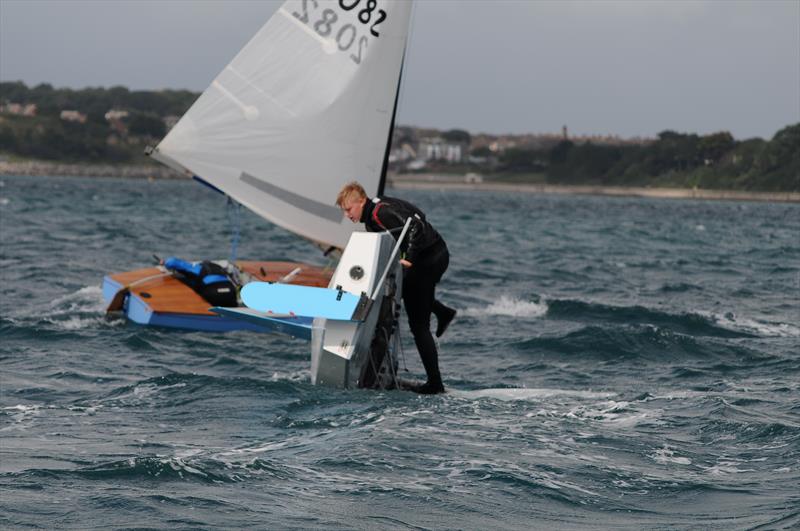 So ended a memorable Nationals. Perhaps not memorable for the right reasons, but one that will be remembered for the great hospitality and enthusiasm of the Weymouth SC team, the wild weather, and the even wilder reaches.

It was great to see such a great turnout and so many new faces in the fleet. It’s clear than many top sailors and ex-Finn squad sailors are looking to the OK to provide them with world class competition as the UK class builds towards the World Championship in 2023 which is being held at nearby Lyme Regis. It’s also clear that the standard of the front of the fleet is taking a step up and that opportunity to rise to the challenge is being relished by many. Indeed, in a week where the depth of the UK Olympic squad system was demonstrated in Japan, it’s great to see some of that same supporting talent moving into other classes and hopefully helping to raise the game of those who want to. 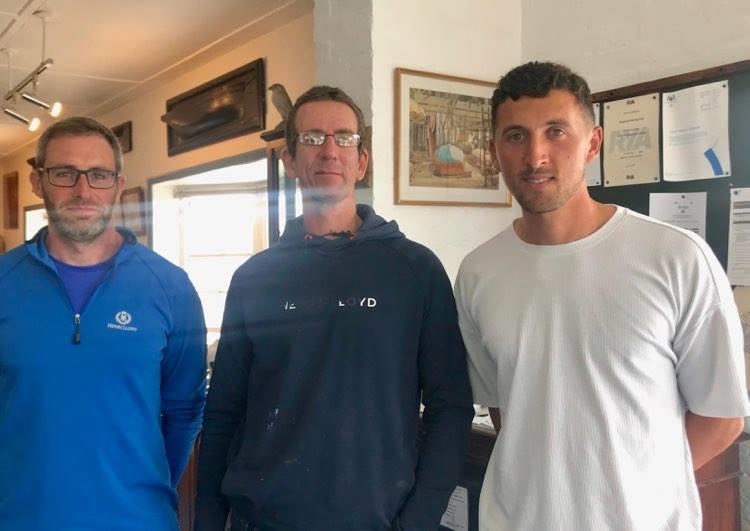 Special mention must be made of:

Chris Bellow and Keiran Bowsher two youth sailors from West Oxfordshire SC, who had renovated old boats and were ‘enjoying’ their first Nationals. Although tired and wet after capsizes they should be applauded for facing such wild conditions and they should be proud of the work they have done bringing the boats back to life.

Ned Winter who used the class demo boat and sailed well in challenging conditions for his first time in an OK. The demo boat is available for anybody wanting to try the OK out. Please contact the association for more details.