12 OKs raced for the Inland Championship on the Thames at Bourne End over the May Bank Holiday Weekend.

It was a weekend for meeting old friends including Rodney Thorne on train gate duty and Jeremy Wicks on rescue. Clive Evison, one of the quickest OK sailors in the late seventies/early eighties, was there in a Phantom – come on Clive, show us you’ve still got it in an OK.

Because the event is part of Bourne End Week, we had the spectacle of Thames A Raters with their 45 foot high rigs racing twice a day. Really entertaining when one capsized on the start line on Mondays morning race. The whole event was a most enjoyable and relaxed affair with good sport, some frustrations that are river racing and a great social. At the very least, it was an intensive tacking practice with some tricky sailing by the lee on the runs. Definitely a good event for Inland and club sailors looking for a meeting to suit them with every chance of doing well in a race or in the event. 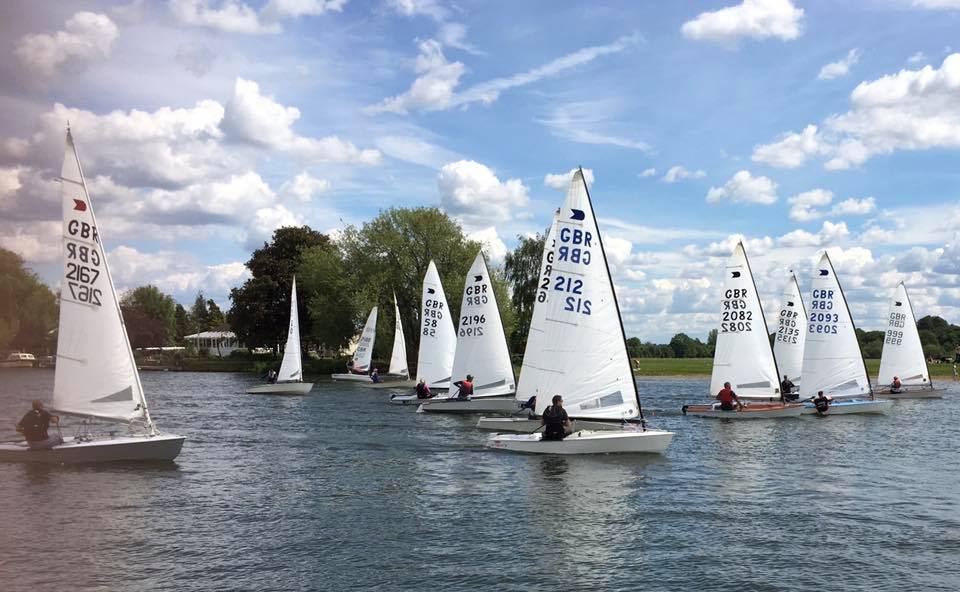 Six races were sailed over three days, each day bringing slightly more wind, and more shoreside entertainment, courtesy of the A Raters.
Race one was a classic lottery in light wind giving everyone a chance on the first trip upstream. Jenny Portsmouth sailed through a lot of the holes on the downwind legs to give the fleet something to think about and Garth Thompson sailed off into the distance. Perhaps local knowledge was going to be the deciding factor in the weekend! The group behind Garth changed positions on a regular basis. Phil Benton and Mary Reddyhoff coming in to the bunch for a while with Edward Crichton and Bill Bradburn. At the end, Garth was already ashore when Edward crossed just ahead of Bill with Douglas Powell in fourth and Mary fifth.

Race two was sailed on similar light conditions and the race progressed in a similar erratic fashion until Douglas made a break in a private puff of breeze, never to be seen again by the rest of the fleet. Edward was second again and Bill was third again, followed by Hugh Myers and Simon Davis.

Race three on Sunday morning saw slightly more breeze making the upwind sailing harder work but it was still vital to track the shifts and use the slacker water at the banks when possible. Douglas, Simon and Edward sailed away from Bill, Garth and the rest of the fleet. Simon was scored ocs so Douglas won from Edward second again and Bill third again. Garth was fourth, Hugh fifth and Phil sixth. Seventh place went to Mary, eight to Chris Burrell and ninth to David Finlayson.

Race four had a touch more breeze again, at one stage a gust came along strongly enough to enable planing on the run. Rapid reactions were the order of the day.
A rapidly improving Andrew Boxer sailed consistently well to end up sixth behind Garth in fifth, Douglas in fourth, Bill third again, Edward second again and Simon gaining his first win.

The fleet came ashore to watch the Raters, organise taxis where appropriate and regroup in smart clothes for the legendary cocktail reception and buffet. The very smart looking OK fleet were a credit to the class (not often we get to say that!). The cocktail reception and party was its usual high status experience with the magic self filling gin and tonics in full flow. Excellent evening.

Monday morning dawned with the prospect of even more wind. The fleet ran the gauntlet again through the beating Merlin fleet to get to the start line (one of the challenges thrown up by having the second start and launching upriver from the start line).

Douglas sailed to a clear win from Simon in second, Edward third, Bill fourth and Garth fifth. For most of the race Garth was fourth with Bill hanging on to fifth in front of Mary. A couple of decent shifts put Bill ahead of Garth, only for the places to change back shortly after. It was only on the last round that the race order was established.

Race six was the breezier race with the first three places as in the morning. Garth was fourth and Mary fifth. Sixth was Phil Benton and seventh Chris Burrell. 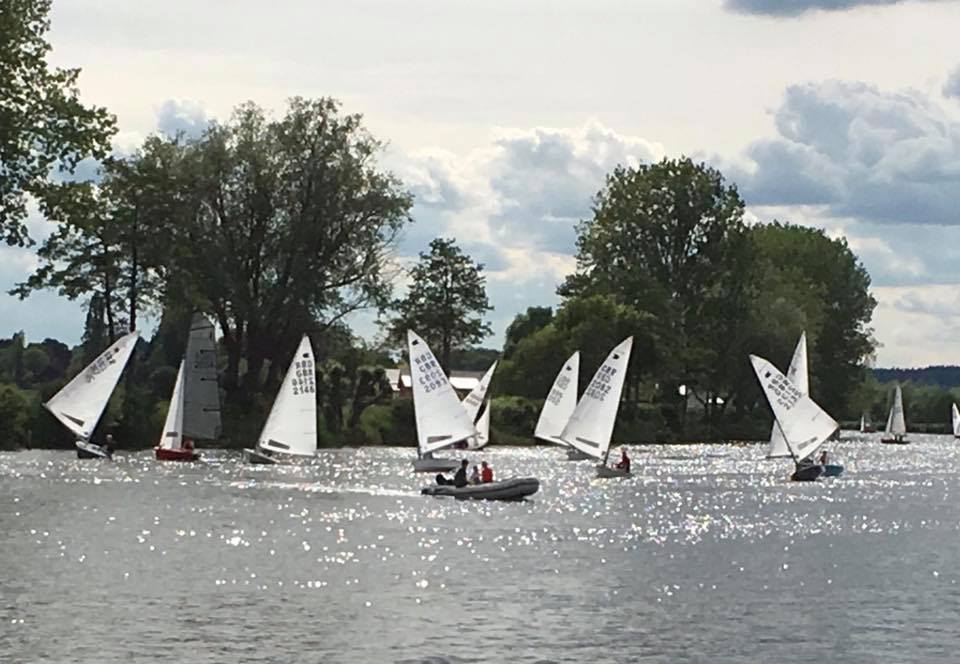 The final result giving Douglas the trophy from Edward and Bill. Mary won the ladies prize. Phil Benton was all a fleet captain could be and more, looking after the fleet throughout and ensuring everyone had a good time. Lots of natural hazards, monumental wind shifts and devious local strategies. The winner overcame them all.

Socially excellent, relaxed schedule and great atmosphere. If you are thinking of your first open meeting, this has to be a great option. Only marginally frustrating!

See you all at the Harken Inlands, Northampton. Another great event for anyone who is tempted to try travelling.