The morning of September the 28th dawned grey and breezy at SSSC, but with the rain helpfully abating, 17 spritely OK sailors arrived for what would prove to be a challenging days sailing. Having dealt with the important business for the day (watching Ireland’s shock World Cup defeat with bacon butties in hand), the fleet turned their attention to the strong gusts and inevitable shifts that lay in waiting. Swiftly the memories of strong consistent breeze at the nationals faded, with the fleet readying themselves for a new type of game. 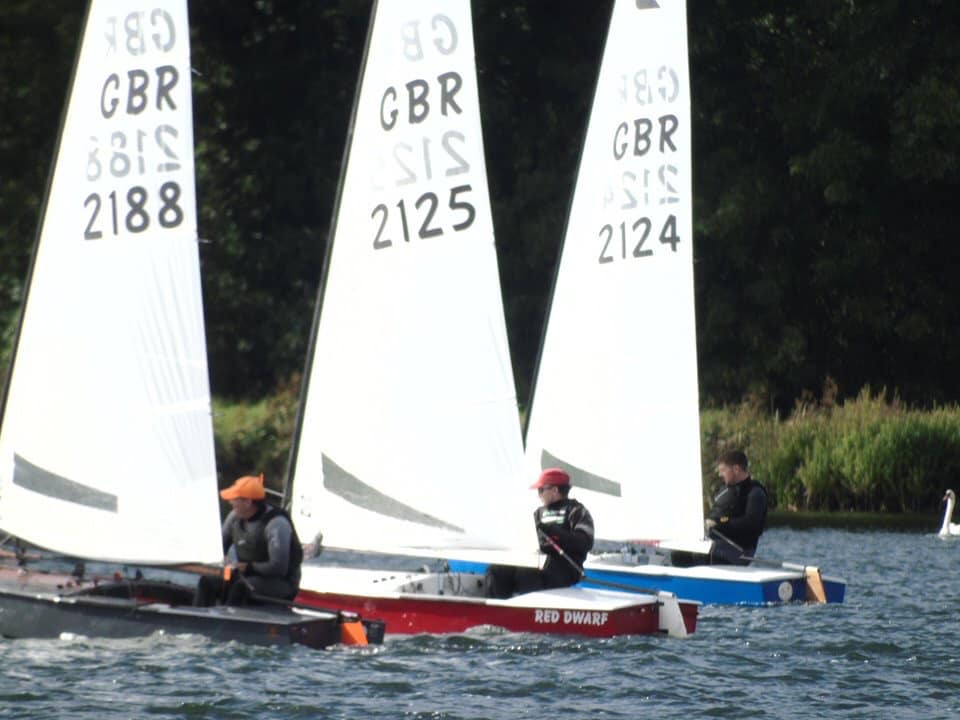 The first race got away with a clean start set to the right of the island, with local Ed Bradburn (SSSC) nailing the pin and Richard Burton (WOSC) punching out the middle of the line well. With a short (South Staffs medium) beat to the first windward mark, carnage ensued as the tightly knit pack exchanged cross after cross with plenty of big shifts and gusts thrown in for good measure. Only now did the fleet truly understand the game for the day, with quick reactions required just to stay upright in the strong lifts and headers.

Regardless, it was Bradburn and Burton round the windward mark first, closely followed by Neil Goodhead (SSSC), Will Croxford (SSSC) and likely some others… Unfortunately, the reporter doesn’t know exactly who as he was well down the pan after a dangerous encounter with one of those monsterous backers! As the race continued Bradburn and Burton began to extend, with Goodhead in hot pursuit. The first reach proved costly for Bradburn however, with some loud ‘conversation’ leading to penalty turns and Burton with a gap. This was much how the race ended, with Burton taking the first bullet, followed by Bradburn, Goodhead, Ben Pickering (Chase SC) having fought back up to 4th and Will Croxford (SSSC) in 5th.

With the fleet thoroughly tested, a hot lunch put on by SSSC was then warmly welcomed, with some more rugby and tales of mammoth holes, lifts, backers and swims. All good fun! 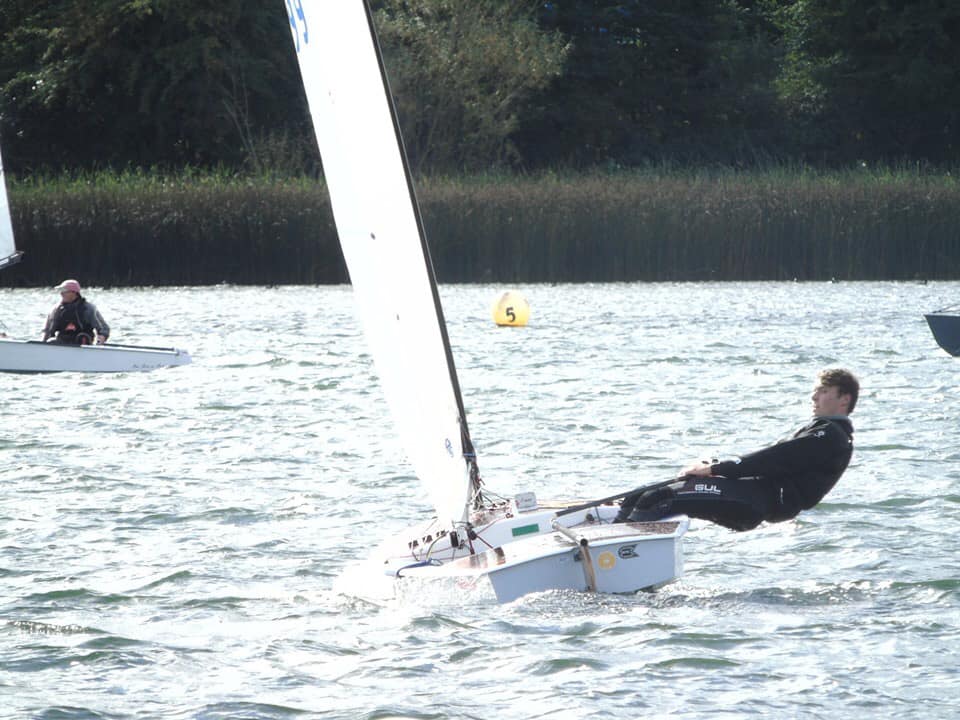 As the fleet began to launch for the second race the breeze gusted up substantially, with some opting to sit on the bench for this one. The fleet were greeted with a port-biased line and the first beat moved to the left of the island for a longer first beat. Off the start it was Pickering this time to nail the pin, holding out left and rounding first, closely followed by Bradburn. Again, Goodhead was well up there showing great pace back in the OK along with Gavin Waldron (SSSC) and Tony Woods (Glossop SC). Pickering proceeded to hold first for the next couple of laps, in a constant battle with Bradburn. The pair pulled out a significant gap, whilst Burton after a poor first beat battled his way back through the fleet. Apparently, Burt especially enjoyed Woods’ covering tacks!

After a few laps Bradburn eventually got the better of Pickering to take the win, with Burton taking 3rd followed by Goodhead and Waldron. 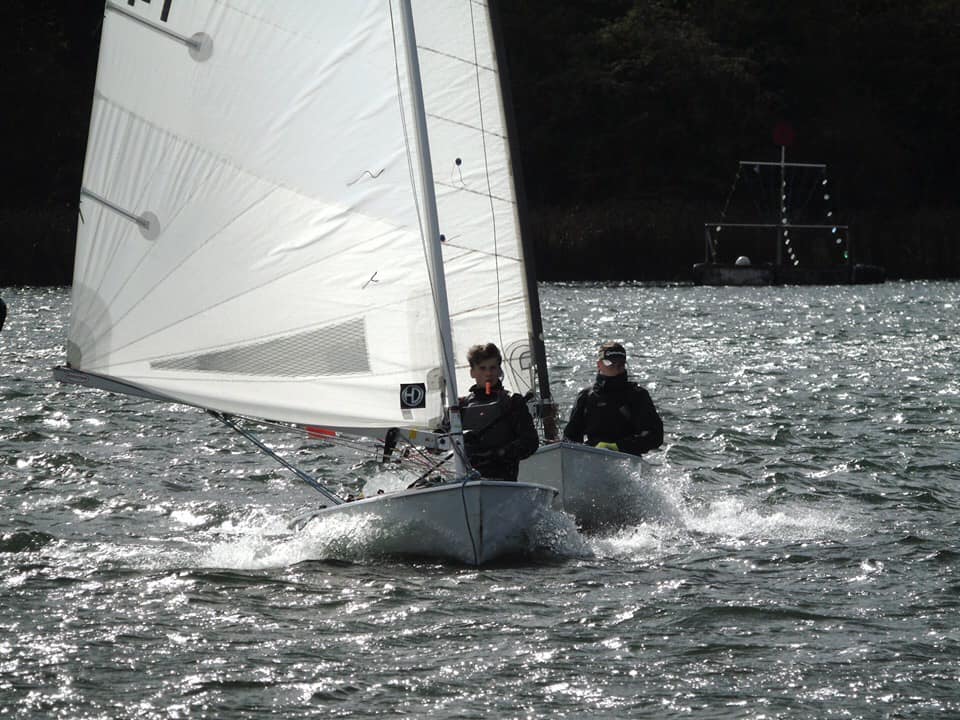 By race 3 some of the fleet had begun to tire, but for the remainder a very port-biased line was set with the windward mark shifted further right. The extent of the bias left many at the pin end floundering as the start gun sounded, with the majority unable to cross the line on starboard. From the muddle it appeared that Woods and Croxford had got away best, with Woods just about tacking onto port at the pin to scoot away. Regardless, Croxford sailed out right to find a good track and round first, swiftly followed by Bradburn, Woods, Burton and Pickering. Pickering managed to sneak inside Burton at the following mark, whilst a battle ensued between Croxford and Bradburn for the lead. Eventually Bradburn slipped through Croxford to take and hold the lead, whilst Pickering climbed the ladders whilst avoiding the snakes to move up to second. This was how it finished, with Bradburn taking a dominant second bullet, followed by Pickering, Croxford, Woods and Burton. 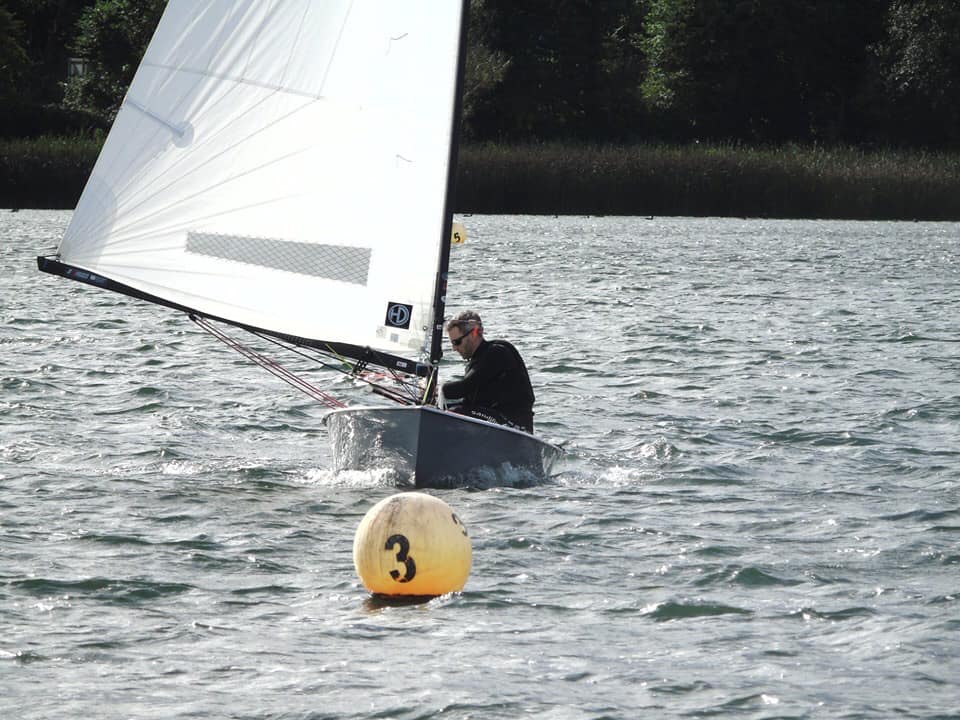 Overall, this gave Bradburn a well-deserved victory in the South Staffs Open Meeting and the re-arranged Northern Championships. Burton took second overall on count-back from Pickering in third, with Goodhead and then Croxford rounding out the top five.

A special thank you must go to everyone at South Staffs for a great day including a warm welcome, great race management and (most importantly…) plenty of food. A special mention must also go to the hardy travellers including Mary Reddyhoff and Hugh Myers coming from the south coast and Keith Byers coming down from Morecambe – true dedication! The final event for this year is the End of Seasons at Grafham, for which entry is already open – we hope to see you all there! 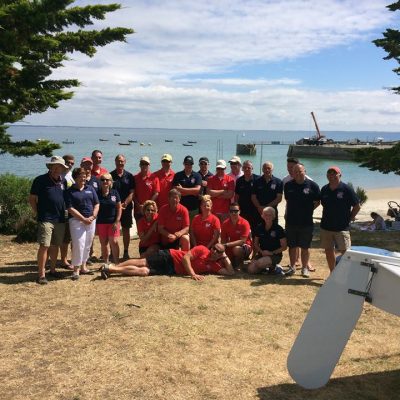